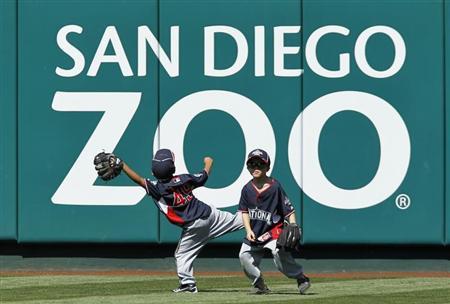 After 10 weeks of training, young players who had worked with a lighter-than-average ball were pitching regulation-weight balls a couple of miles per hour faster than their peers, researchers found.

That's consistent with past trials showing the benefits of practicing with lighter balls in that age group, said Glenn Fleisig, research director at the American Sports Medicine Institute in Birmingham, Alabama, and a pitching safety consultant for Little League Baseball & Softball.

"It seems to be a reasonable training exercise for baseball pitchers, for 13-year-olds and up," he told Reuters Health.

For little kids - who already play on a smaller field and use lighter bats - the lighter balls could be an option for both practices and games, he said, as they may encourage children to learn correct throwing mechanics early on.

For their new study, Chiang Liu from Taipei Physical Education College and colleagues worked with a team of 24 junior high baseball players aged 13 to 15.

The researchers assigned half of the players to practice pitching three times per week for ten weeks with a regulation baseball weighing 5 ounces. The other half trained with a lighter, 4.4-ounce ball. Players threw a total of 42 to 66 pitches per week in practice.

During the study, pitching speeds in the regulation group held steady at 67 miles per hour, on average. Among players who trained with the lighter ball, however, velocity - which was tested with a normal-weight ball - increased from 67 to 69 miles per hour after 10 weeks.

Young players' arm speed also increased after training with the lighter baseball, the researchers reported in the Journal of Strength and Conditioning Research. There was no change in throwing accuracy or shoulder rotation among either group.

The American Academy of Pediatrics considers baseball one of the safest sports for kids. But recently, concern that young, developing players are throwing too many pitches and stressing their arms too often has been growing (see Reuters Health story of February 28, 2012 here: reut.rs/wBMFDY).

Fleisig's own research has shown there's less torque on the arm when young pitchers use a lighter ball. And that would "imply fewer injuries" over the long run for players training with those balls, he noted, even if they continue to compete with the regulation baseballs.

Although the new study did not record any injuries, Liu agreed that practicing with a lighter ball can decrease loading on the shoulder and elbow joints, potentially reducing a teenage player's risk.

And for younger kids, both practicing and competing with the lighter balls makes the most sense from a safety and development standpoint, the researchers said.

"For youth players who have poor throwing mechanics or lower muscle strength, lighter balls not only decrease the risk of injury by reducing the torque on joints, but also develop arm velocity while maintaining proper pitching mechanics," Liu told Reuters Health in an email.

"We strongly recommend that the youth leagues should be using lighter balls both for games and pitching practice."